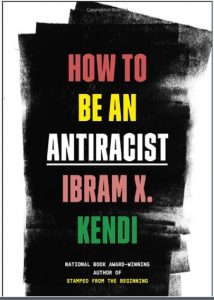 7:00 p.m. / via Zoom / We continue conversation centered around Ibram X Kendi’s book, “How To Be An Antiracist” Thursday, July 15 at 7 p.m. If you would like to join this Zoom group, please contact Sarah Gates who will be leading us and sending the Zoom invitations to participants. The queries associated with the three chapters we will be discussing (9,10 & 11) are listed below.

COLORISM: A power collection of racist policies that lead to inequities between Light people and Dark people, supported by racist ideas about Light and Dark people.

“To be an antiracist is to focus on color likes as much as racial lines, knowing that color lines are especially harmful for Dark people.” – Kendi

“Malcolm X once said, ‘I have always been a man who tried to face facts, and to accept the reality of life as new experience and new knowledge unfolds it.” – Kendi

ANTI-WHITE RACIST: One who is classifying people of European descent as biologically, culturally, or behaviorally inferior or conflating the entire race of White people with racist power.

“I learned…that every time I say something is wrong with Black people, I am simultaneously separating myself from them, essentially saying ‘them niggers.’  When I do this, I am being racist.” – Kendi

List (three) facts about your views on race that you must face about yourself.

List (three) forms of new knowledge you’ve gained about yourself through discussing these queries that you must accept.

List (three) new ways you can begin using your power in the racial struggle.