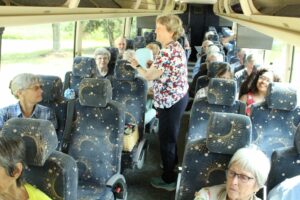 A continuation of the account of our September Quaker Pilgrimage. . .

The Quaker Pilgrimage, which began at New Garden Meeting on Friday, September 16, was planned as part of a celebration of the 350 years that followed the visits to America of English Friends William Edmundson and George Fox. A bus was chartered and paid for by our meeting’s Blaylock Fund and carried about 30 of us Friends (from several NC meetings/yearly meetings) to eastern North Carolina and Virginia. Max Carter offered some historical commentary along the way.

Some basic history: Quakers have worshipped in North Carolina for 350 years. Friend Edmundson made his way through the Great Dismal Swamp in the spring of 1672 to what is now the town of Hertford. There he met with Henry Phelps at his home on the banks of the Perquimans River, and held the first organized Christian religious service on record in Carolina. In November of the same year, Fox also visited Perquimans and saw that the new Quaker community was well settled. After this, Quakerism grew and became the dominant religion in Carolina until the end of the seventeenth century.

There were several historical meetings and sites we were able to visit. 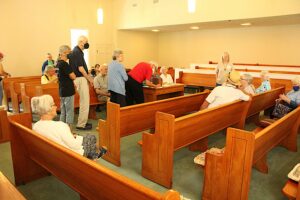 The first was Cedar Grove Meetinghouse in the little town of Woodland, NC, which opened for worship in January, 1869. This congregation belongs to Rich Square Monthly Meeting in North Carolina Yearly Meeting (Conservative). It was 1904 when the yearly meeting split for the first time. Pastored meetings which included sermons and hymn singing were becoming the norm, but some Friends wanted to conserve the traditions of unprogrammed, waiting worship and created the Conservative branch. Rich Square at Cedar Grove became the central point for this new yearly meeting. Barbara Gosney spent considerable time with our group, going over the history of this meeting. We then had a simple lunch with the few members present and engaged in a very interesting discussion of the ways of Conservative Friends.

The bus drove on to Edenton, the “big city” where our hotel was located. There we could walk to the waterfront, look out onto Albemarle Sound (while admiring the lovely Roanoke River Lighthouse) and eat in one of the little restaurants downtown.

On Saturday local Friends Lynwood Winslow and his cousin Glen White (descendants of early families in the area) joined the group and were the primary guides for the day. They directed us to Phelps Point, where we found a historical marker telling of the visits of Edmundson and Fox to Perquimans. 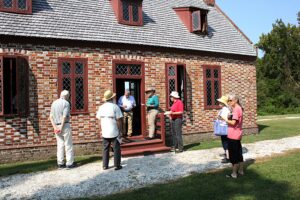 The Newbold-White House was not too far away. It was first owned by Joseph Scott, and George Fox paid a visit to the plantation there in 1672. In 1726 Quaker Abraham Sanders and his wife Judith became the new owners and in 1730 built the lovely manor house now standing there. It is recognized as North Carolina’s oldest brick house, built with locally made bricks, and later named for its last private owners. We enjoyed walking through the two story home, furnished much as it would have been during the 18th century, but were sorry to learn that they owned four slaves.

Lynwood Winslow pointed out many old meetinghouse sites and significant houses as we left Hertford. We then stopped to eat a delicious and relaxing lunch at an exquisite Queen Ann style house – the Nicholson House Restaurant in Belvidere. Built in 1891 by Francis Nicholson, who was descended from a prominent long-standing Quaker family in Perquimans, it is not an example of Quaker simplicity!

Currently owned by Paul and Deborah Byrum of Piney Woods Meeting, it has recently been remodeled and serves as a popular restaurant, tea room and gift shop. 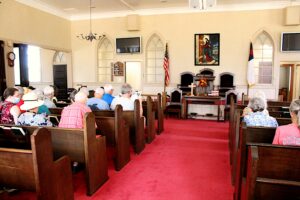 Next we headed to Piney Woods Meetinghouse in Belvidere. Its origin was a group of Friends who met at Samuel Newby’s home in the 1720’s. In 1744 a meetinghouse was built, and in 1757 the congregation received a visit from John Woolman, who spoke about how slavery harmed both the enslaved and enslavers. In 1854 this was the only Friends Meeting in the Albemarle region. Significantly remodeled in 1927, but retaining some elements of its past, it is currently an active meeting, and independent (belonging to neither Friends Church of NC or NC Fellowship of Friends).

Up River Meeting is also in Belvidere, and also independent. Members of Piney Woods Meeting in 1866 requested permission to hold an “indulged meeting” that would not require traveling a long distance, which was granted; they met in the Up River Schoolhouse. In 1875 they built a simple meetinghouse, and have enlarged it three times. This congregation kept with traditional Friends worship longer than some in North Carolina. Music was gradually used in worship beginning in the 1920’s and a pastor was hired in 1953. However, it has retained some architectural elements of traditional meetinghouses. The photo of the Pilgrims at the top of this article was taken at Up River Meeting.

Saturday ended with a meal at Captain Bob’s Seafood in Hertford. We thoroughly enjoyed eating and talking amongst ourselves! 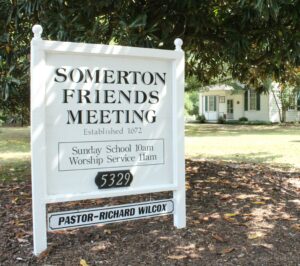 For a final Friends meeting visit we crossed the border into Virginia and attended Somerton Meeting in Suffolk on Sunday morning. George Fox visited this area too in 1672, and this encouraged Friends to establish a meeting that year. Somerton is the oldest, active Quaker meeting in Virginia. We can attest to active! Pastor Richard Wilcox was also the pianist, and we had worship in the lovely old meetingroom which included scripture, two hymns, a pastoral message and offering. 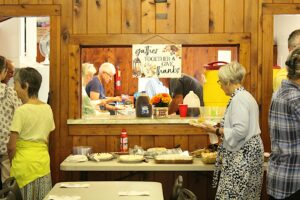 The Somerton Friends provided a huge and delicious potluck meal before sending us on our way home.

We Pilgrims were blessed to have had an informative, interesting and inspirational journey celebrating those 350 years of NC Quakers. Thanks to planners Sara White and Max Carter, guides Lynwood Winslow and Glen White, bus driver Tommy Hayes and photographer Roger Seel. And we certainly appreciate having the Blaylock Fund pay for the transportation.

Congratulations to all NC Friends for keeping the faith all these years! –– Kate Hood Seel