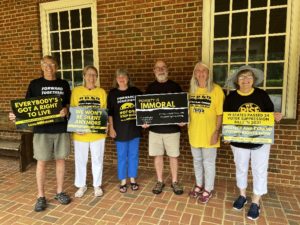 Several New Gardeners met in the middle of the night at Shiloh Baptist Church to pile into buses headed towards Washington DC. Their mission: to participate in a June 18th powerful and passionate march and moral assembly of poor and low-wage workers and faith leaders. The Poor People’s Campaign gathering drew thousands of people from every state in the nation, all committed to a visible witness against injustice that robs people of human dignity.

Tens of thousands of people lined Pennsylvania Avenue and even more watched online as impacted people shared their stories involving voting rights, the nation’s failure to respond to COVID, especially among poor communities, workplace rights, the need for health care and living wages, and the day-to-day struggle of not having enough money to survive. Even as they told stories of pain so deep that they cried, poor people and low-wage workers proved their power during the assembly and called upon citizens to demand politics, policies, laws and legislation that end economic inequity at the heart of human rights abuses.