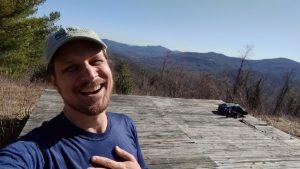 April 24, 2021 / 7:00 p.m. /  In 2006 as his senior project for the Guilford College Quaker Leadership Scholars Program, Jon Watts set up a recording studio in the lower level of Friendship Friends’ meetinghouse and created “A Few Songs Occasioned.” That collection of original music reflecting on early Quaker history and spirituality served in part as a launching pad for his later musical projects and QuakerSpeak. It was a remarkable accomplishment for an undergraduate and remains quite remarkable 15 years later.

A 15th anniversary celebration will be offered by Zoom at 7 p.m. on April 24. Jon will share about his creation of the music, share excerpts from the collection, and Max Carter will offer insight into the historical significance of the early Quaker figures that are featured in the songs. Sign up at: https://tinyurl.com/c5k6hk6y