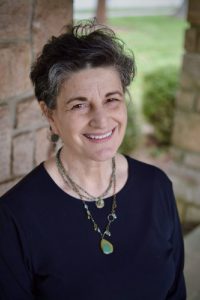 The Meeting on Ministry and Counsel is pleased to introduce Deborah Suess, who will serve as Interim Pastoral Minister of NGFM during Margaret’s 10-week maternity leave, likely beginning in early to mid-August.  Deborah will bring prepared messages at semi-programmed Meeting For Worship on June 13 and July 18, and New Gardeners will have an opportunity to greet her in person after 10am Meeting for Worship on July 18.

Deborah (pronouns: She/Her) is known to many New Gardeners as the pastoral minister of First Friends Meeting from 2004 to 2017.  Her spiritual journey has been a remarkable one. She grew up in a Jewish-Christian home, walked through the doors of a Quaker Meeting for the first time in her early 30s, and eventually became a “Convinced Friend.” She attended seminary at Earlham School of Religion, initially not planning to become a pastoral minister: with a background in social services, she “wanted to include spirituality more deliberately” in her work as a counselor or chaplain.  However, she answered a call from West Branch Friends Church in Iowa and went on to stay 10 years as pastor, then continued her pastoral ministry in Perth, Australia and Spokane, Washington before moving to Greensboro with her husband, Tim Jackson, in 2004. Since stepping aside from her pastoral duties at First Friends, she has enjoyed serving two congregations as interim pastoral minister.

MM&C met with Deborah on February 15 to explore the challenges and opportunities of the role of interim pastor during the relatively brief, 10-week period of Margaret’s leave.  We do not want simply to “store up” the pastoral needs of our congregation, awaiting Margaret’s return; we hope New Gardeners in need of pastoral care will reach out to Deborah and allow Deborah to provide the full range of pastoral services in Margaret’s absence.  On July 1 Karen Garraputa will become Clerk of MM&C, and Clint Corcoran will become Presiding Clerk of the Meeting; both are committed to helping Deborah engage fully in the life of our Meeting. Deborah’s own spiritual journey has made her a wonderful source of insight and support to a community that has grown to include so many convinced Friends.

Please take every opportunity to welcome Deborah and to get to know her during her time as our interim pastor.  You will be able to reach her at the same cell phone number Margaret uses: 336-338-1986 or at the office at NGFM: 336-292-5487.