George Lakey: Lessons for Today from a Lifetime of Nonviolent Activism / November 20, 2022 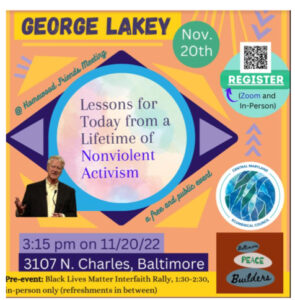 We have been invited to join a forum with George Lakey. Many of us are inspired by his activism and witness. Piedmont Friends is inquiring into the possibility of George coming to our area next year and in that process we were invited to join by Zoom an event in Baltimore featuring George entitled, “Lessons for Today from a Lifetime of Nonviolent Activism” on November 20th at 3:15 p.m.

George Lakey is a queer, Quaker activist and master storyteller who will share about his lifetime involvement in nonviolent struggles for peace, civil rights, LGBTQ rights, labor justice, and the environment. He will emphasize lessons from his life which apply to
us during these challenging times, finding hope in even the darkest of times through strategic joyful activism.

George Lakey is author of a memoir, “Dancing with History: A Life for Peace and Justice, and the book, How We Win: A Guide to Nonviolent Direct Action Campaigning. This event follows a prescient webinar Baltimore PeaceBuilders sponsored in September 2020 featuring George Lakey discussing: “What to do if there is a Coup?: Nonviolent Civil Resistance.”

From his first arrest in the Civil Rights era to his most recent during a climate justice march at the age of 83, George Lakey has committed his life to a mission of building a better world through nonviolent movements for justice. Lakey draws us into the center of history-making events, telling often serious stories with playfulness and intimacy. In his memoir, “Dancing with History”, he describes the personal, political, and theoretical—coming out as bisexual to his Quaker community while known as a church leader and family man, protesting against the war in Vietnam by delivering medical supplies through the naval blockade in the South China Sea, and applying his academic study of nonviolent resistance to creative tactics in direct action campaigns.

George Lakey was born into a white working-class family in a small town in rural Pennsylvania and has been active in direct action campaigns for seven decades. He recently retired from Swarthmore College, where he was the Eugene M. Lang Visiting Professor for Issues of Social Change. He has been named Peace Educator of the Year and was given the Paul Robeson Social Justice Award and the Martin Luther King Peace Award. He is a regular contributor to the Waging Nonviolence/People Powered News and Analysis and he was a founding member of Earth Quaker Action Team. He also wrote the book “Viking Economics: How the Scandinavians Got It Right.” He lives in Philadelphia.