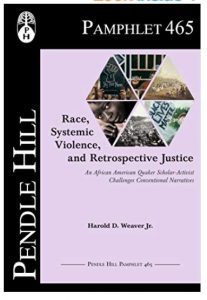 “The North American economy grew into a modern, industrialized society on the backs of African labor through the legal exploitation, dehumanization, and systemic and direct violence directed against enslaved people. Even after the end of legal slavery in the mid-nineteenth century, as outlined in the 13th, 14th and 15th Amendments to the US Constitution, the legal violence, exploitation, and dehumanization of the formerly chattel slaves and their descendants have continued into the twenty-first century.” He has a proposed plan of action for Friends. It includes;

One bold idea within his plan is to create an Annual Day of Remembrance of those affected by chattel slavery. Might we as Friends consider this? More information on the action plan can be found in the pamphlet; it is Pendle Hill Pamphlet #465. – Kate Hood Seel