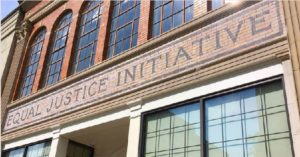 Bryan Stevenson, founder and executive director of the Equal Justice Initiative spoke virtually to an A&T University audience on Wednesday, November 17. He noted the practice in Germany of ensuring that their people learn about the parts their ancestors played in allowing the atrocities of the Holocaust, in hopes that such things will never be repeated. One way is the memorialization of its victims on 10 x 10 centimeter “stumbling stones” placed in front of the homes where they had last lived. Sadly, in the United States, we as a country have not fully reckoned with our past violence against African Americans (and others), and there are even attempts to forget or re-write the events that could make White people feel guilty. Bryan Stevenson has initiated the Community Remembrance Project to “memorialize documented victims of racial violence and foster meaningful dialogue about race and justice.” You can read about it here.