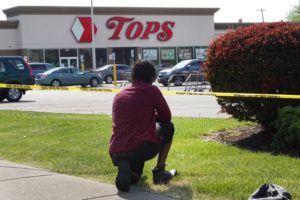 Just 10 days ago there was another horrendous mass shooting in Buffalo, New York. I found a very interesting online article in Politico magazine: How the Buffalo Massacre Proves There’s No ‘Great Replacement’ by Sheryll Cashin on 5/21/2022.

“For decades, East Buffalo didn’t even have its own supermarket, but after a long campaign, East Side descendants succeeded in getting the Tops Friendly Market.

The fact that a young white terrorist chose the East Side of Buffalo and this Tops grocery store to take out his anger about a fake “great replacement” theory* demonstrates the opposite of what he believed. In Buffalo and in most American cities, with the help and encouragement of the federal government, it’s been Black people who’ve been displaced, cordoned off and forced to endure underinvestment and segregation.

Which, tragically, is why so many were in the same supermarket, at the same time, innocently shopping for food for themselves and their families when he went looking for Black people to kill.”

I want to honor the deceased victims by recording their names: Geraldine Talley, Margus Morrison, Celestine “Stiney” Chaney, Andre Mackneil, Deacon Heyward Patterson, Pearl Young, Ruth Whitfield, Katharine “Kat” Massey, Roberta Drury, Aaron Salter. Let us hold their families securely in the Light, and continue to work however we are led to end this madness. – KHS
* See a definition from NPR at https://tinyurl.com/ycyjtdv9