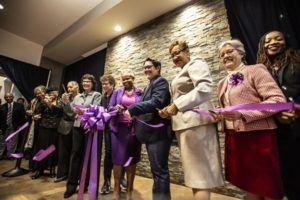 Have you ever visited the Ruth Wicker Tribute to Women in the Barber Park Event Center in east Greensboro? It is worth seeing! Ruth Wicker was a local resident who made this possible with her estate gift. It honors women educators, researchers, activists, advocates, journalists, nonprofit leaders, a musician and a pilot who called Greensboro home.

A Greensboro News article (2019) is copied below;

“New exhibit commemorates Greensboro women who made a difference”

“GREENSBORO — From the first African-American student to attend Greensboro High School (now Grimsley) to a former Bennett College professor who went on to become a congresswoman, 31 women are recognized in a new exhibit honoring the contributions and achievements of women.

The 3,500-square-foot event center cost more than $3 million to build.

Wicker left a stipulation with her donation. She said the center would have to create and house an exhibit honoring achievements of North Carolina women.

“We wanted to make sure we honored her request,” said City Councilwoman Sharon Hightower, who represents the east Greensboro district the center is in. “She’s looking down on us. She’s pleased. You look at this space, there’s really no words.”

Wicker was an avid gardener and championed parks and gardens in Greensboro.

Greensboro Parks and Recreation led the project that was 10 years in the making.

“There were times that we were really challenged,” said Greensboro Assistant City Manager Chris Wilson.

Wicker’s firm is known for work on Friendly Center and the Greensboro Coliseum.

Studio Displays created the interactive exhibit with help from an advisory committee that picked the honorees from community recommendations.

The Tribute to Women is the first stand-alone exhibit of its kind in North Carolina and one of only a few in the country.

Present were 17 women honored in the exhibit.

“The living honorees that are here with us today, it’s loads of history, loads of experience and struggles,” Hightower said after the ceremony as people crowded into the exhibit hall. “It’s really overwhelming to be in a room like this with people that you can honor while they’re alive and walking with you.”

Aggie “Jean” Jackson, who was the first female and first African-American athletics director for the city of Greensboro, attended the opening.

“To be among a group of women of this stature, my mind is just blown,” Jackson said.

The tribute added to recent honors for the late Josephine Boyd Bradley, the student who broke the racial barrier to attend Greensboro High. She recently had a street renamed for her.

Other honorees include politicians like Carolyn Allen, the first female mayor of the city of Greensboro; Yvonne Johnson, the city’s first African-American mayor; and Alma Adams, a former City Council member who is now a member of the U.S. Congress.

Educators include Goldie Byrd, a former dean of N.C. A&T who went on to found the Center for Outreach in Alzheimer’s. Mary Mendenhall Hobbs, a Quaker leader and teacher, was honored as was Charlotte Hawkins Brown, who founded a boarding school for African-Americans.

Liz Seymour, who was honored for her work as the founder of the Interactive Resource Center, was humbled to sit between Sandra Hughes, a local television journalist, and Betty Cone, a festival planner and advocate for Old Greensborough.

Print journalist Culey “Vickie” Kilimanjaro, who founded the Carolina Peacemaker weekly newspaper with her husband, was at the ceremony and seemed overwhelmed by the hugs.

The stories of some of the honorees, while maybe not as historical, are no less significant.

Take Capt. Pam McAdoo-Rogers, for instance. She is a 30-year veteran of the Greensboro Police Department who was the North State Law Enforcement Officer of the Year in 2009. And Estella Marie Stamey. She helped neighborhood children with homework in her Eastside Park home and helped create the Eastside Park Community Center.

The exhibit also recognizes four women’s organizations: the Greensboro Commission on the Status of Women, which aims to improve the quality of life for women in Greensboro; the Greensboro Women’s Club (Information has been corrected to fix an error. See correction at end of story. 11 a.m./Feb. 1, 2019); the Women’s Resource Center of Greensboro, which helps women access community services and develop new skills; and the League of Women Voters of the Piedmont Triad.

Correction: Ruth Wicker was not a member of the Greensboro Women’s Club. Information was wrong when the story first published at 7:45 p.m. Jan. 25, 2019.”