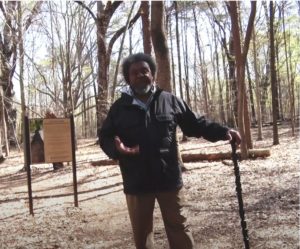 Last Saturday 23 of us – Friends, along with members of the Friendship Community Partnership, were led by James Shields on the trail to the Underground Railroad Tree in the Guilford Woods. One of the spirituals he sang briefly was, “Walk Together, Children; Don’t You Get Weary!” He often sings that on the trail with children, he said, and reminds them that a journey on the Underground Railroad involved great discomfort and led to pure exhaustion. But they had to keep going to gain their freedom, so they did, and encouraged each other along the way. (A good example for all of us as we work for justice. . . !) He also stressed that the Underground Railroad work was the first integrated civil rights work in our country. Although it is often harder to find information on the contributions of African Americans, they were critical to its success, and we know about a few. One was Hamilton’s Sol (a Black man enslaved by Hamilton), who helped Levi and Vestal Coffin find runaways in the woods. Sol was deeply dedicated to assisting the enslaved to find freedom and suffered great harm to himself in the process.