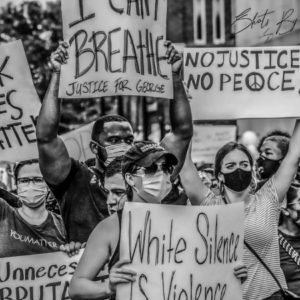 A powerful Statement on Systemic Racism worth sharing from the North Carolina Council of Churches, in which NC Friends hold membership: https://tinyurl.com/ahsk93wf

A resolution adopted by the Governing Board of the North Carolina Council of Churches, June 2, 2020.

Whereas the North Carolina Council of Churches was founded in 1935, primarily for the purpose of addressing racial inequity and racial injustice, and

Whereas our white founders soon recognized that racial equity and racial justice should not be discussed without including racially/ethnically diverse voices and so included black faith leaders from North Carolina as members of the Council by 1943, and

Whereas we have striven together in these eight decades to support the Civil Rights Act, support the Voting Rights Act, lament the deaths of untold black neighbors whose names are written on the heart of God and on the hearts of those who loved them, call for justice when the systems of justice failed us, and hold firm to the belief that our diversity makes us stronger, and

Whereas the murder of George Floyd by a white police officer while three other officers watched has exacerbated an already unacceptable devaluing of black and brown lives, and

Whereas racism has been compared to a complex underground rhizome that spreads unseen before erupting into specific social structures (e.g., law enforcement), concentrating attention on this part of the structure while the main tumor continues to strengthen racism in the remainder of the system, and

Whereas we recognize and confess that the racist systems in which we live primarily benefit white people, we therefore place a higher expectation on white people to do the necessary work of dismantling these systems;

The Governing Board of the North Carolina Council of Churches hereby resolves to press ahead with urgency to understand the dynamics of racism in all of its manifestations and to be transformative in society by working across systems and structures where interpersonal, systemic and institutional racism operate, and to work to dismantle the racist systems that perpetuate and allow violence against black and brown bodies.

We will immediately and actively: