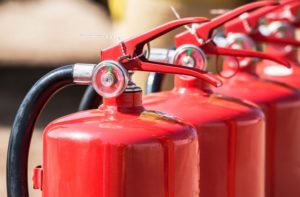 African American “T.J. Marshall is credited with improving the design of the fire extinguisher, with a patent issued on March 26, 1872. He invented a system in which water is pumped through pipes in buildings to individual sprinkler heads. The system can be activated by manually turning a valve in the building. Marshall’s fire-extinguishing sprinkler system has been in use in the United States since 1874. It was commonly used in large factories as an effective means of putting out large and potentially catastrophic fires. Today, sprinkler systems are required by code in the United States in buildings more than 75 feet tall.” For more information, see: https://tinyurl.com/32n6zfma