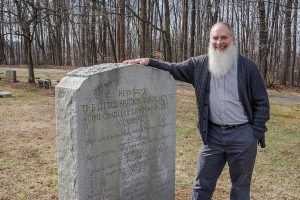 There will be a Cemetery Tour on the Day after the Battle of Guilford Courthouse Anniversary at the New Garden Friends graveyard at 11 a.m. on Fourth-day, the 16th, to commemorate the work of New Garden Friends on March 16, 1781 to care for the wounded and dead resulting from the Battle of New Garden (preceding the Battle of Guilford Courthouse) the day before. Hundreds of casualties from the fighting lay scattered along New Garden Rd., at “The Crossroads,” in farm fields, and all around the old meetinghouse and throughout the cemetery. The meetinghouse itself was used as a field hospital, and a mass grave in the burial grounds holds an estimated 125-150 bodies from both “sides” of the conflict. Some members of New Garden who cared for the dead and wounded contracted smallpox from the soldiers, with one prominent member dying from the disease.

The tour will visit the mass grave, the site of the old meetinghouse, the graves of some of those who cared for the fallen combatants, and will also include other work of Friends for human betterment and in response to war and social injustice. Max Carter will lead the tour.