Africans Were Sought and Enslaved for Their Skills / October 20, 2022 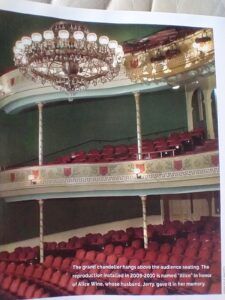 If you’ve ever taken an Underground Railroad Tour with former Guilford College Bonner Program Director James Shields, you have probably heard him say that slaveholders were seeking Africans with skills, not just brute strength and stamina.

This fact was reinforced when I recently read an article from Wrightsville Beach Magazine about Thalian Hall (a grand old theatre) in Wilmington, NC, after attending a delightful play there. 1855 was the year construction began, and it opened for the first performance in 1858. When the theatre was renovated in 2009-2010 it was discovered that the “mortise and tenon” method was used. Only hand tools were utilized and every joint fit perfectly together without the use of nails. The curator of the North Carolina Room at the Hanover County Public Library stated then that the master carpenters who built this hall, as well as many other major buildings and finer homes in Wilmington, were enslaved Africans. The enslaved did the work and their masters were paid!

The accompanying photo (credit Brownie Harris, photographer) shows the inside of this beautiful building. I think it is important to understand that our usual notion of the abilities of those who were enslaved is very limited. And that most white Americans have been socialized to woefully underestimate the capabilities and accomplishments of our Black neighbors and colleagues. I am always so glad to find examples like this to challenge our cultural prejudices.