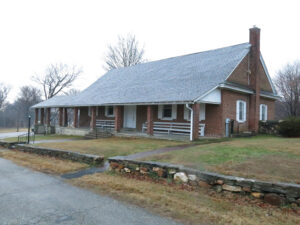 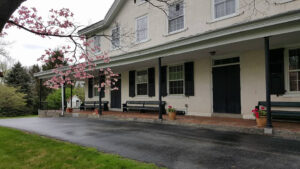 The New Garden Friends Meeting namesake Meetinghouse is located in New Garden Township equidistant from the Chester County Seat (West Chester) and Valley Friends Meetinghouse. With hope this (very stretched!) family link will spark future NGFM links with our Mother PA Meeting, Valley Friends evolved from land granted to it by Lewis Walker (the original settler of Tredyffrin Township). It is a beautiful meetinghouse built in 1871 with the original winch still located in the attic that was used to raise and lower the partition to separate men from women during meetings for business. As with NGFM, the 1871 building followed a (likely log) meetinghouse built in 1731 that was located in the Burial Ground which, also like our NGFM, became a mass graveyard for soldiers who died after being cared for in the makeshift hospital- meetinghouse–@ Valley, during the 1777-1778 winter encampment at nearby Valley Forge.

The family link with the original New Garden Meeting is admittedly a stretch but here goes: Joseph Walker (Lewis’ grandson) lived at the neighboring (but quite a hike away) huge Walker family “Many Springs Farm.” Joseph and his (1st) wife, Sarah (cousin of General Anthony Wayne who used the farmhouse as his headquarters during the encampment) had thirteen children. Two years after Sarah died, Joseph married Jane Rankin, widow of William, @ New Garden Meeting! Jane and William Rankin had some seven children, most of whom went with their mother to live with Joseph and family for a total of ~20 kids! Five generations later, William Weber Walker (my grandfather) was born in that same Many Springs farmhouse–in the shadow of Valley Friends Meetinghouse. As said, that’s a VERY stretched link between our NGFM and the original in PA–with luck, it will serve to spark further links between our Meeting and its Mother Meeting in New Garden Twp., PA. (ref: https:// www.valleymeeting.org/history + “Lewis Walker” by Priscilla Walker Streets <also available online>) / Skip Yeakel

Attempted (but failed) WikiTree Comment added 12/06/22: Hi Loretta and Fellow Lewis Walker Descended Cousins! This is my first time using WikiTree which I hope will prove itself a useful free tool to connect with Lewis Walker Cousins and others. Based on previous online research starting with www.familysearch.org, it seems safe to conclude that Lewis was the Grandson of Clement Walker, Esq who was an English MP and an author whose writings during the English civil war era resulted in his death while awaiting trial (for two years!) in the Tower of London in 1651 (ref: Wikipedia). It seems Clement Walker’s home was near Bristol, England from whence I presume his Son, John Walker, fled to Wales to escape Quaker and/or family retribution for his Father’s (and Mother’s!) writings. John had a Daughter– Jane–in 1660 and a Son, Lewis, in 1666. Lewis left Wales for Philly (via Barbados?) in 1686 and married shipmate Mary Morris (born 1667) and, apparently, never corresponded with his Sister Jane who stayed in Wales and married David Morris (born 1657 and perhaps related to Mary?).

Lewis became the first settler of Tredyffrin Twp, PA and “only” had eight children, one of whom was Isaac who lived in the large home that Lewis built and called “Rehobeth.” Isaac had twelve children, the eldest of whom was Joseph Walker who built a stately farmhouse in 1757 (and still inhabited!) on the neighboring “Many Springs Farm” that was quite a hike down Walker Road from Rehobeth. Joseph and Sarah (Cousin of General “Mad: Anthony Wayne who used the 1757 Joseph Walker House as his headquarters during the 1777-78 encampment @ Valley Forge) had thirteen children before Sarah died in 1792 and Joseph re-married a widow named Jane Rankin @ New Garden Meeting on 1794. Jane had seven-some children of her
own, most or all of whom went with her to live with Joseph @ Many Springs Farm–for a total of some twenty children! Joseph was in the 3rd Lewis Walker generation and his
home was enlarged and stayed in the family until the 8th generation followed when William Henry Walker sold the farm after his wife, Charlotte Weber Walker, died in 1903. Their Son, William Weber Walker, was my Grandfather which makes me the 10th generation descendant of Lewis Walker. For Cousins and others with interest, there is a Facebook site entitled “Rehobeth, Lewis Walker Homestead Site.” Hoping for Lewis Walker Cousin replies here on on the Facebook site.