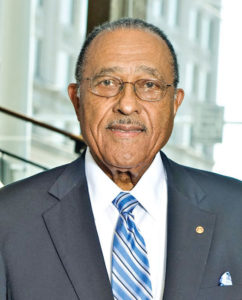 It is time to VOTE in our local elections – for mayor, city council and five bond issues. Election Day is July 26; early voting ends July 23.

Hopefully all readers will exercise that right and privilege, and in doing so, think about African Americans like Henry Frye, who was denied the right to vote upon returning from military service, due to a failure to pass the “literacy test” (given to Black citizens only) prior to the Voting Rights Act of 1965.

Fortunately, Frye persevered. This experience drove him to want to become a lawyer in 1959, and he graduated from the University of North Carolina Law School with honors. Since that time he has been working for fairness and justice. In 1983 he became the first African American to sit on the North Carolina Supreme Court and in 1999 became the Chief Justice. – Biographical information from ANCHOR (A NC History Online Resource)

As we now face threats to fair elections – especially in areas with more people of color, we can be inspired by the hard work and success of Justice Frye and find our own ways to support secure voting for everyone.