News From the Diversity Task Force 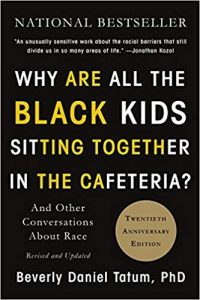 The Diversity Task Force is bringing you a review this week by Kate Seel. We hope you enjoy reading this. Also, we have an exciting announcement. Our first open forum called the Gathering on Sunday, August 11 at 4 p.m. Beverages will be served. Our facilitators will be none other than the Rev. Nelson Johnson and his wife, Joyce. We know many of you are familiar with his profound work as a pastor and activist. We look forward to seeing you as we continue on this wonderful and important journey at NGFM.

“Why Are All the Black Kids Sitting Together in the Cafeteria?” By Beverly Daniel Tatum, Ph.D.; 1997. The author, a clinical psychologist, wrote this book to “help others move beyond fear, beyond anger, beyond denial to a new understanding of what racism is, how it impacts all of us and ultimately what we can do about it.” Regarding the question in the title – this phenomenon of self-segregating by race persists even after schools have been integrated, and Black and White children move together as a cohort from Kindergarten to 8th grade. It does not appear until about 6th – 7th grade and is primarily due to developmental identity issues and fear among parents. First of all, as puberty begins, children ask “Who am I?” This is a particularly important question for Black youth, as they tackle “What does it mean to be Black?” in our White-dominant culture. For them, the latter question tends to becomes more
urgent than other identity-related questions pertaining to gender, career, religious views, political views, etc. They have gotten a clear message that being Black is not the norm, that it is better and easier to be White, and, beginning to acknowledge the personal impact of racism, they feel the need to learn more about their racial group.

Academic ability grouping begins in earnest in middle school, with a pattern of White children in more advanced groups than Black children. They naturally associate with those in their classes, which tend to be less racially heterogeneous.

Puberty raises the anxiety of parents about inter-racial dating, so friends’ gatherings such as birthday parties tend to be less
racially diverse.

White teachers inevitably “say the wrong thing” to Black children. In processing their hurt and anger, the children look to friends rather than their (wiser) parents, due to seeking independence at this developmental stage. White friends often don’t understand, and encourage them to “not be so sensitive.” So they turn to their Black friends, who have probably had similar experiences and can offer support. Black children can also develop “oppositional social identities” (i.e., different styles of speech, dress, music, etc.) to create an identity that is “not White.” This behavior protects them from the racism they are experiencing and keeps the dominant group at a distance. Racial integration was supposed to encourage inter-racial interactions, so this is a disappointing phenomenon. (The author notes that so many Black students together, acting oppositional, is often threatening to administrators as well.) Clearly we are up against very entrenched policies and behaviors in the educational system.

I wonder what we as a Meeting can learn from this study. Can we create an environment where all people feel so welcomed and supported that they do not need to segregate themselves? Kate Hood Seel – 6/19