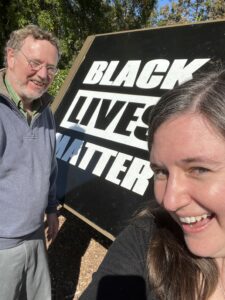 The mysterious August disappearance of the Black Lives Matter sign from the yard at New Garden Friends Meeting was resolved on October 11.

Members of the landscape maintenance crew for New Garden Cemetery spotted the sign in the woods near the cemetery. They pulled the sign from its hiding place and hauled it to the meetinghouse, where they alerted Valerie Harris, the office manager. The landscapers used a vehicle to transport the bulky sign, which still had the lower ends of its posts encased in concrete. “We know y’all have been looking for this sign,” they told her. Indeed, we had.

Some New Gardeners may not have missed the sign, which was erected last year in a highly visible spot near New Garden Road. The sign was just outside the construction zone for the new sidewalk. It appears in a photo made by the contractor on August 9. But a few days later, members of the meeting walking in the yard noticed it lying on the ground.
The sign, says Janet Inmon, appeared to be undamaged. The two posts were still encased in concrete. Inmon saw the sign in the same position a week later. She and others assumed it had been removed by the sidewalk construction crew and that it would be remounted.

But another check later in August found that the sign had disappeared. New Gardeners began investigating.

He reported back that the contractor doing the work said his crew had not touched the sign. It wasn’t in their way.

And yet, the sign had been dug up, which was no small job. It lay on the ground in plain sight for at least a couple of weeks. And then it vanished and remained missing for the better part of six weeks until October 11, when it was found stashed in the woods.

Are vandals responsible? The sign is undamaged. Did pranksters take the sign? If so, they are strong and determined. They toted the sign, surely in the dark and on foot, more than the length of a football field. Will we ever know who carried out the deed? Probably not.

It’s not the first mystery to have occurred at New Garden. The culprits behind the 1955 blast that ripped apart the cemetery’s Revolutionary Oak were never brought to justice. The Black Lives Matter sign soon will be back in place along New Garden Road. Quakers don’t usually make wagers, but it’s a good bet that we’ll all be keeping a closer eye on it this time.