“It is Unchristian to Enslave Africans…,” William Edmundson 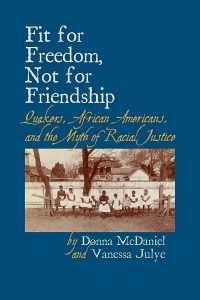 From Fit for Freedom, Not for Friendship by Donna MacDaniel and Vanessa Julye: “The first Quaker voices against the enslavement of Africans were raised in the late 1600s. . . In 1676 William Edmundson was the first Friend of European descent in the British Empire to write of his conviction that it was unchristian to enslave Africans. [He] spent many years traveling to and living in Quaker communities in the British Caribbean and North American colonies [with George Fox] where enslavement existed. . . Edmundson initially expressed concern for Christianizing the enslaved for the sake of their souls, but soon he became impressed by what he viewed as the damaging effect of enslavement on the souls of Quakers. . .” p. 15.

It was exactly 100 years later that North Carolina Yearly Meeting finally made owning slaves a disownable offense. We believe now that slavery should never have existed, and eliminating it took way too long. What will our heirs think of our actions today to end racism? – Kate Hood Seel