Help to End the Devastating War on Yemen: Reach out to your Members of Congress / July 2022 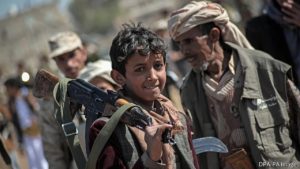 Email and call Rep. Kathy Manning’s office and urge Rep. Manning to be a co-sponsor of the Yemen War Powers Resolution.  The resolution will end U.S. participation in the Saudi-led coalition war and blockade in Yemen.  The U.S.’s role has exacerbated the devastating and growing humanitarian crisis.

The Triad FCNL Advocacy team met with Rep. Manning at the end of April.  While Manning is in agreement that the war in Yemen is horrible, and the U.S needs to take action, she is reluctant to be a co-sponsor.  While our Triad team attempts to meet with her again, she needs to hear from other constituents!

We care about what’s going on in Yemen and the U.S. can have a significant impact.  Right now, the two other co-sponsors from NC are Rep. Alma Adams & Rep. Madison Cawthorn – it’s is getting broad co-sponsor support and Rep. Manning needs to join the numbers.  Not in her district?  Reach out to your member as well and thank Rep. Adams & Cawthorn for their leadership on the issue.

Read more & use FCNL’s online system to find a phone number to call and/or their system to send a message to Rep. Manning’s office — https://www.fcnl.org/updates/2022-06/house-lawmakers-introduce-yemen-war-powers-resolution