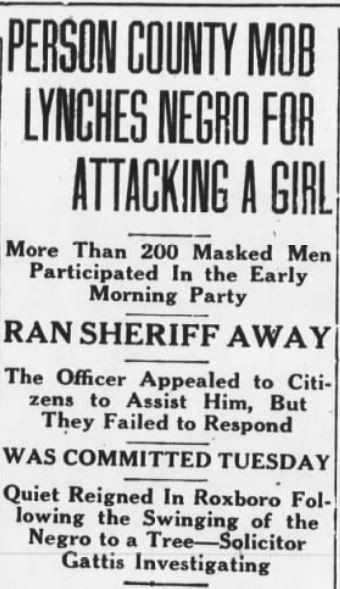 Shady Hill Baptist Church, 1500 Old Durham Road, Roxboro. There will be a memorial service honoring the only documented victim of lynching in Roxboro. The service is expected to last about one hour. Ed Roach from Reidsville, NC, was employed at the construction company of Nello Teer, a prominent Durham businessman, who wrote a letter stating that Mr. Roach was working on his construction site near Roxboro at the time of the alleged assault on a young woman, the crime of which Mr. Roach was accused. The “Durham Morning Herald” reported on July 8, 1920 that a mob of approximately 200 masked men had stormed the jail in Roxboro the previous day, July 7, and had taken the incarcerated man to a local African American church (Shady Hill Baptist Church), where he was lynched and riddled with bullets. The tree on which the lynching occurred was subsequently removed, roots and all, by the men of the church. Now, a century later, a memorial service will be held for the victim, Ed Roach, at the church where this travesty occurred.
Unfortunately, we cannot undo the injustices of the past. However, recognizing them and honoring the victims of such heinous actions together make a leap in reconciliation. Participation in this memorial service is a small way we can support President Lincoln’s premise that “all men are created equal.”