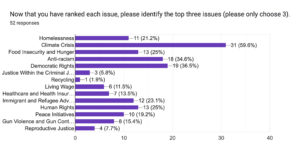 Results from the Peace and Social Concerns Spring Survey

The Peace and Social Concerns committee requested New Gardeners to respond to an on-line survey to help us discern what were the priorities of the Meeting for study, advocacy, coordinated activities and use of our limited resources in awarding small grants to local non-profits. We asked people to rank a series of 14 issues from 1 (highest priority) to 5 (lowest priority) for the Meeting. (We acknowledged that for most Quakers, all 14 listed would be important; our goal was to attempt to discern areas selected as “most urgent” by our NGF Meeting.) In addition, we asked you to share the issues in which you are currently engaged (as a volunteer, donor, board member, active supporter). Finally, we asked New Gardeners to indicate any issues around which you would like to help initiate programs or actions with other Friends.

We received 53 responses. (Thank you!) In the initial ranking, issues that 70% or more people ranked as first or second in priority were the following:

New Gardeners expressed interest in all issues, and multiple comments addressed the difficulty to separate the intersection of issues (e.g., Human Rights, Reproductive Rights, Democratic Rights). The percentages of the top two rankings of those less than 70% are as follows…

Not surprisingly, New Gardeners volunteer, donate financially, and are involved in myriad organizations that witness to Quaker Testimonies. The Peace and Social Concerns Committee will use this information as we consider future programming and tap into the knowledge and commitment of this dedicated Meeting.