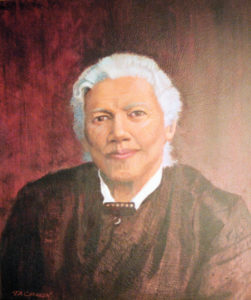 From an AMERICAN ABOLITIONISTS Knowledge Card by the New York Historical Society:

‘He told me that I was made for his use, made to obey his command in every thing; that I was nothing but a slave.’ When Harriet Jacobs published Incidents in the Life of a Slave Girl in 1861, readers were shocked by its brutality. Jacobs told of enslaved women with no control over whose children they bore. She described children ripped from the arms of their mothers. She recounted the violence directed against any enslaved person who dared to speak the word ‘No.’

As an enslaved woman in North Carolina, Jacobs personally endured these experiences. She managed to escape in 1835 and, after hiding for seven years in her grandmother’s attic, finally reached safe haven in New York.

During the Civil War, Jacobs moved to Washington, DC, to help black refugees. On hearing the news of the Emancipation Proclamation of 1863, which freed enslaved people in Confederate states, Jacobs wrote: ‘I am more than repaid for all I have endured.’” – KHS ([email protected])