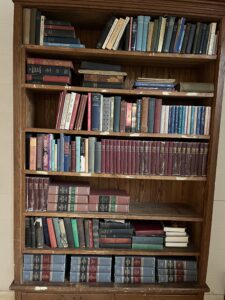 John Kepchar and I were asked to examine and deal with the books on the bookcases in the Brotherhood Room. To date we have done the following:

1. Confirmed that Elmer Brown’s library is available for New Garden to deal with, not having any ownership issues we could identify.
2. Shared a list of Elmer’s books with Guilford College’s archives folks and asked them to identify the one’s that Guilford might be interested in, that might have commercial value (and presumably a path to continued use), and those that might be discarded without loss. They agreed and have also identified one title that might be of interest to Earlham
College’s archives. (The list was made several years ago by Jennifer Schall and is almost 50 pages. The list is being of great help in this project.)
3. Conferred with a Quaker bookseller in Maine who has agreed to also examine the list. She shared a path to continued use that might be available for books that otherwise seem useless in the US. Friends United Meeting, of which we are a part through NC Fellowship of
Friends, owns and operates Friends Theological College in Kenya. It has several locations and duplicate books would not likely be a problem. Plus, their accreditation status is aided
by continued accession. (English is the national language in Kenya.)
4. We have also identified another Quaker book expert here in NC who might be willing to examine the list. He has not yet been contacted.
5. John and I spent a morning cleaning and organizing the space involved. I believe Friends will find it’s appearance improved for the time being while the project continues.
–– Bill Eagles