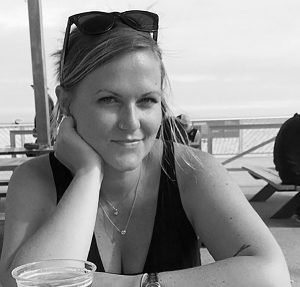 9:45 a.m. / Join Guilford Alumni, Alex Gingrow for a discussion about her work, her inspiration, and her thoughts on the artist’s role in society as a conduit of, and commentator on culture.

This task of keen observation is powered by relentless personal awareness and a constant practice of empathy and critique. It is exhausting, exhilarating, lonely, and utterly fulfilling.

Born in 1979 in Knoxville, TN, Alex Gingrow has lived and studied in cities as various as Boston, MA, Savannah, GA and the small village of Dorf Tirol, in northern Italy.  In addition to her own artistic practice, she has participated in numerous panel discussions, fundraisers, speaking engagements, and as a guest artist at various performances and happenings.

Her first solo show in New York City was held at Mike Weiss Gallery in September 2012 and was followed by residency appointments at the Hambidge Center in Rabun Gap, GA, Fountainhead Residency in Miami,FL, VCCA in Amhurst, VA, the Wassaic Project in Wassaic, NY, and ArtGarda in Sirmione, Italy.  Gingrow has exhibited widely both nationally and internationally and has received critical reviews from publications such as The New York Times, The Wall Street Journal, Modern Painters, and Frieze Magazine. Gingrow currently lives and works between New York City and the Hudson Valley.

For more information about any of our Religious Education programming, or if you would like to receive links, please contact Karin Heller.